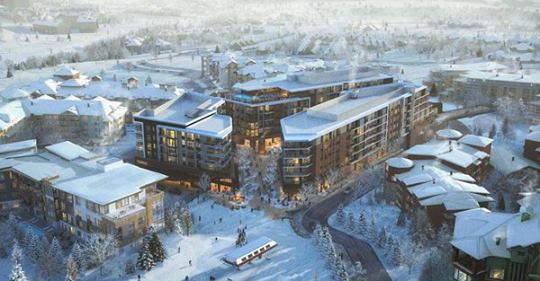 A spectacular luxury ski-in, lift-out resort will be developed at Park City, one of the largest ski areas in the United States. Pendry Park City will be conveniently located in the heart of Canyons Village at the entrance to Park City Mountain. Construction is set to begin early summer 2019 and be completed for winter 2021.

Pendry Park City is the beginning of a new era of hospitality in Park City. It will be at the heart of Canyons Village as it is part of a larger upper village master plan. The resort is bound to become the social hub of Canyons Village. It will be conveniently located only 35 minutes from Salt Lake City International Airport.

The resort is being developed by Pendry Hotels and Columbus Pacific Development. “We spent a lot of time thinking about the caliber and quality we wanted for this development and ultimately, Pendry represents the service, architecture and experience that will bring a distinctive offering to both guests and residents,” says Brian Shirken, president, Columbus Pacific.

Pendry Park City will offer 150 guest rooms and suites as well as luxury residences. It will offer a contemporary design with a palette of warm woods, stone and metals, designed by SB Architects and IBI Group architects.

“This location in Canyons Village will provide guests a contemporary retreat created with respect for alpine warmth and tradition—a place that we hope will redefine the future of mountain living and hospitality,” says Michael Fuerstman, co-founder and creative director of Orange County, Ca.-based Pendry Hotels.

Pendry Park City will offer a wide array of amenities to its guests that will be beyond compare. Pendry will have the only rooftop pool and bar in the area, in addition to four unique lounge, restaurant and bar experiences with a vibrant après-ski venue. A Japanese-American restaurant will offer mountain fare, steaks and chops along with Japanese standards of sushi and ramen. Casual American fare will be offered in the resort’s recreation facility.

The resort’s Spa Pendry will feature eight treatment rooms and a full menu of treatments. The property will also have a state-of-the-art fitness center, arcade games in the recreation facility and Pinwheel Kids Club. There will also be more than 7,000 square feet of indoor meeting space, including a 4,000-square-foot ballroom.

Park City is a year-round mountain resort that has more than 7,300 acres of skiable terrain. Operated by Vail Resorts since 2014, Park City Mountain Resort, now combined with what was Canyons Resort, is the largest ski area in the country giving a skier the ability to ski all the way from the Canyons Village to historic downtown Park City.  With 348 trails, four terrain parks and eight mountain peaks, the area has an average annual snowfall of 356 inches. Park City Mountain Resort is a member of Vail Resorts’ EPIC season pass program.

The slalom and giant slalom U.S. Olympic Teams train at Park City and during the 2002 Olympics, Park City hosted the snowboarding events as well as the alpine giant slalom events for both the men and women.

Park City is also the home of the renowned Sundance Film Festival and is a vibrant summer destination. During the summer months, the resort offers lift service access to hiking and mountain biking trails as well as to an alpine slide and an alpine coaster.

Incorporated as a city in 1884, Park City is a charming blend of old and new as 64 of its buildings, many of which are located along the town’s Main Street, are listed on the National Register of Historic Places.

A fast growing division of Montage International, Pendry Hotels is a luxury hospitality brand that operates boutique hotels and residences in such locations as San Diego and Baltimore with other properties currently under development in La Quinta, Ca. (opening 2021), Natirarin New Jersey (opening 2020) and Manhattan (opening in 2021).

Each property offers a unique contemporary style with an emphasis on the arts and local community in the city in which it is located. (See Forbes recent article about Pendry’s Natirar property at “Former Home Of King To Become Luxury Hotel and Residences In New Jersey”.)

I am a Manhattan-based luxury travel and real estate writer. I was a contributing writer at Barron’s Penta magazine where I penned the Trendspotting column and also covered luxury real estate, pursuits, collecting and other topics. I am co-editor of Pursuitist, the luxury l…